Looking for things to do in Honolulu? Scaventour™ is a guided live action outdoor escape game that is modeled off of an escape room game, but instead of the game taking place indoors in a private venue, it is outside in public spaces. Like an escape room, players are challenged to open many locked cases and bags in order to find the next location and get to the end within 60 minutes. At times, Scaventour™ will feel like an escape game, but other times, it feels like a scavenger hunt, or a treasure hunt, or even like in a famous code breaking movie, or one about a treasure hunt. People who enjoy geocaching should find that Scaventour is a fun game to play. Book now to enjoy a fast-paced tour experience that is like no other you've ever encountered.

Perhaps you have played outdoor scavenger hunts or murder mysteries before. This main Scaventour games are closer to an escape game because you have a guide who acts as the game master (which allows us to give you some neat tools to use to solve the clues (i.e. a laser range finder, a compass, an angular ruler, laser keyboard, etc.)). The guide is very important because he or she allows the game to be complex, but also have help if your group needs it. So, this isn't a self-guided game, rather it is what you would expect to find in an escape room, but outside.

Tourists will find that the tours allow you to explore Honolulu and Waikiki in an unforgettable way. Both tourists and residents of Hawaii will find that Scaventour™ is a great way to connect with the local sites. It's a good double date experience as well, or something to do to celebrate a birthday. Escape rooms and scavenger hunts are often used as Corporate Team building exercises because the group must work together to solve the challenges and get to the end. Visitors at the Hawaii Convention Center may be looking for something extra to do while they are on Oahu. Scaventour™ is a great way to get outdoors and enjoy Honolulu while engaged in a group event. Or, check out the option for using Scaventour as a means for surprise proposal idea in Honolulu. A new version of an escape room in Waikiki or escape room in Honolulu, holding the thrill of the escape game without being trapped inside and missing out on the beautiful weather. Great for large groups and group activities in Honolulu or group party ideas in Waikiki.

Scaventour is a walking game, not a running game. Some teams have tried to run, but almost all of them have failed.

For teams that have younger players or novices, some of the puzzles are modified to better suit their skill level. Furthermore, there are some additional components of the game that can be added if you have a couple of players as young as 7 playing the game.

Are you up to the challenge? 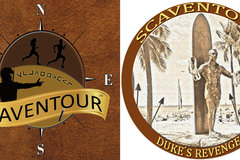 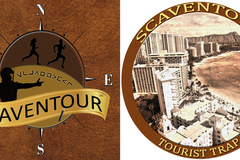